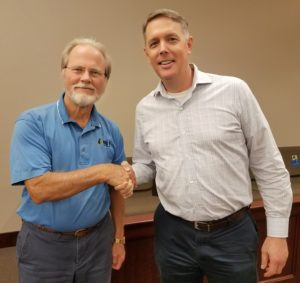 The Town of Chapin has hired Nathan T. Powell of Columbia as its Director of Planning and Zoning, a position which has been vacant since the first of the year after the resignation of Chris Clauson. He begins his duties next Tuesday.

He was introduced to the members of the Chapin Planning Commission Tuesday, and is shown here being welcomed to Chapin by Mayor David Knight.

A native of Wheaton, IL, Powell is a graduate of Calvin College in Grand Rapids, MI, and holds a Masters Degree in Urban and Regional Planning from Michigan State University.

He is an independent architecture and planning professional, and has been employed since December 2012 as an REO Specialist with the South Carolina State Housing Authority.

See this article for more information.